Hakeem is home! On 12 February he arrived at Tullamarine airport in Melbourne and into the arms of his joyous wife.

He had spent 76 days unjustly imprisoned in Thailand and for every single one of those days, he faced deportation to danger in Bahrain.

Hakeem’s wife thanks you

Hakeem’s wife had been separated from her husband since his arrest on their honeymoon in November last year.

On his release, Hakeem’s wife sent this message to you and everyone else who helped free Hakeem:

My heart is now full with gratitude. Just so thankful that these tears are falling out of relief and joy.

I’m especially grateful for all people who supported Hakeem around the world. Finally this nightmare has ended, and I am very happy to see everyone happy with me at this moment.

I would like to say thank you Australian Government for all this support, thank you Amnesty International, Human Rights Watch, Lawyers, Craig, Andrew, Sarah, Pascoe Vale Club, GIDHR, Sayed, all journalists, the Australian people, friends and family and everyone who has supported. Thank you all, you have given me big support to be strong. I love you all and thank you from the heart. Well done. We did it.

Hakeem fled Bahrain in 2014 after he was convicted in an unfair trial of vandalising a police station, even though he was abroad and playing in a televised football match at the time.

In 2017 Hakeem al-Araibi found refuge in Australia. A talented footballer, he resumed his career playing for Pascoe Vale FC in the Victorian football league. Since finding refuge in Australia, he has spoken out about human rights abuses in Bahrain, including the torture he suffered in detention.

In November Hakeem traveled with his wife to Thailand for their honeymoon, but was detained on arrival after the Bahrain authorities initiated an Interpol red notice for him– effectively an arrest warrant. This goes against Interpol’s own regulations which ban red notices against refugees on behalf of the country they fled from. The red notice was lifted, yet Thailand continued to detain Hakeem and were considering deporting him back to Bahrain. 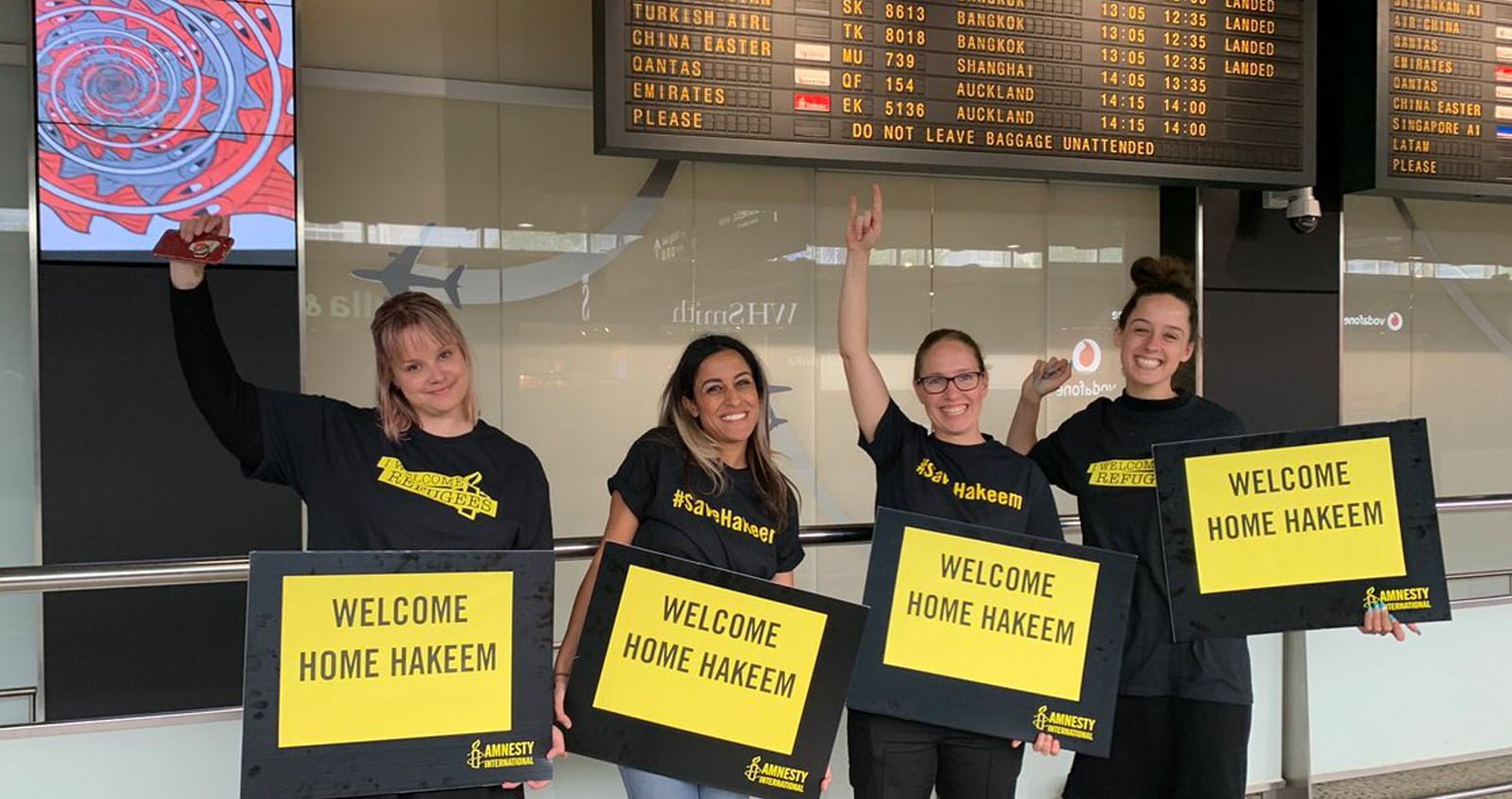 What did supporters do?

We all knew that Hakeem faced imprisonment and torture if sent back to Bahrain. So Amnesty International supporters mobilised worldwide to call on the Thai authorities to him return to his friends, colleagues and teammates in Melbourne.

The movement to #SaveHakeem grew from an Amnesty International petition to span three continents and tens of organisations. It mobilised football teams from the local to the national, engaged Olympians and celebrities, and gathered the support of thousands of people worldwide.

Supporter across the world joined together. We partnered with other organisations, such as the Gulf Institute, and together mobilised more than 165,000 people to add their voice to #SaveHakeem.

Former Socceroos captain and Amnesty International  ambassador Craig Foster kept the media momentum going, even visiting Hakeem in prison to let him know that he wasn’t alone – you were all by his side, every step of the way.

Our movement showed that we would not stop until Hakeem was free.

On 11 February our movement heard the good news: Thailand’s Attorney General had ordered that Hakeem would be going home to Australia.

This is why the Amnesty movement exists – to show people who face some of the worst injustices that they will never face them alone, and to ensure their human rights are realised.

Together we must keep mobilising worldwide for people like Hakeem. We must continue meeting with governments, writing media stories, documenting evidence, gathering lawyers’ advice and activating our communities.

Behind the scenes, a lot of work goes into sustaining the attention on a case like Hakeem’s – and there are countless people languishing behind bars right now, who fear they’ve been forgotten.

All this is only possible with your support. Please consider becoming a regular giver today and help bring hope to more people like Hakeem.